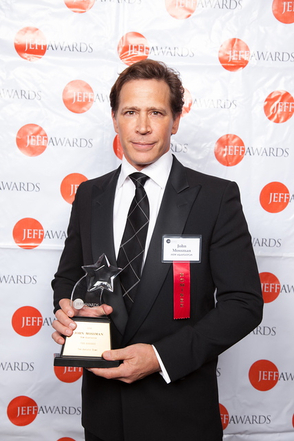 The Goddess, screenplay by Paddy Chayefsky, adaptation by John Mossman, received a 2014 Jefferson Award for New Adaptation.  Arranged through an agreement with the Chayefsky estate and William Morris Endeavor, this marks the first adaptation of one of Chayefsky's screenplays for the stage, and the realization of a long-pursued goal by The Artistic Home to stage this Oscar nominated screenplay.

For more on The Artistic Home's production of The Goddess, click here.

Full results of the 2014 Jeff Awards can be found here. 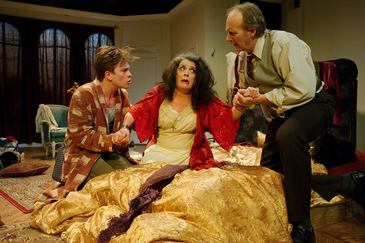 "One of the best ensemble comedies I have seen in years" - Highly recommended, Chicago Stage Standard

"The execution is ferocious in Mossman’s hurricane of a production... Hilarious... has to have set some kind of record for sustained hysteria." - Highly Recommended, Chicago Reader

"The finest comic ensemble work seen on a Chicago stage in years!...Delivers so many laughs that I left the theatre worn out from laughing." - Highly recommended, Chicago Critic

"Brilliant...flounces between comedy and tragedy with whiplash speed... Run to see this show."- New City

"A mad, mad, mad sexy family farce that will warm you up in this long winter" - Gapers Block
"One of the top rated shows in Chicago" - Theater In Chicago 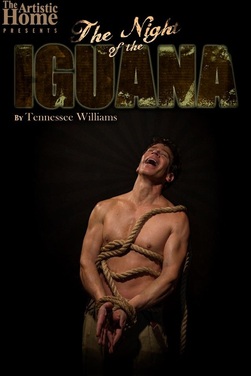 “The Night of the Iguana  is now receiving a rip-roaring production by The Artistic Home...The most flamboyant of the visitors to this Mexican hideaway is the smart, fiercely energetic, intensely watchable John Mossman,"  -  Hedy Weiss, Chicago Sun Times

"Equipped with unsurpassable instincts, John Mossman’s performance as Rev. Shannon is nothing short of electric. From the moment he comes on stage, doused in sweat and almost tripping over his excitable energies, Mossman manages to imbue in every moment a charged spontaneity, and in his capable hands, Williams’s “dramatic poem” has never seemed so fiercely alive." - Anthony Mangini, Chicago Critic.

"Mossman is able to convey the frenzy of a man on the brink of collapse but without extinguishing the light of the man still living." - John J. Accrocco, New City

"In the lead, John Mossman  attacks this role with limitless fervor.  A compelling Mossman is this blustery emotional whirlwind.  His choices are perfectly erratic keeping the audience transfixed on his every movement. " - Katy Walsh, The Fourth Walsh 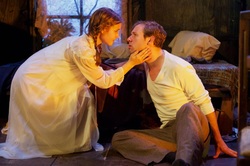 "In September, Seanachai Theatre tackled the great Sean O’Casey’s first important play, The Shadow of a Gunman. It’s a play of character and “crack” (Irish slang for talk and banter) rather than plot—which O’Casey telegraphs miles away—and Seanachai was fortunate to have John Mossman as director. Himself an actor and teacher (he and his wife run The Artistic Home), Mossman took the often-purple and poetic prose of O’Casey and turned it into intimate speech deeply rooted in the personality of each character, without ever losing the Irish charm or O’Casey’s passion."  -  Jonathan Abarbanal, WBEZ

And from WBEZ critic Kelly Kleinman - "Top shows of 2011: Best play with an Irish Lilt (always a crowded category in Chicago) - A tie between Shadow of a Gunman at Seanachai, and A Touch of the Poet, at Artistic Home (directed by Mossman's wife Kathy Scambiatterra).  Whether it's O'Neill or O'Casey, you  can       always get a true feel of the Ould Sod from these two." 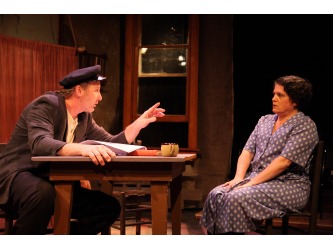 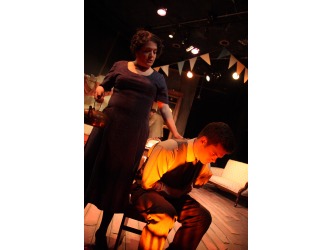 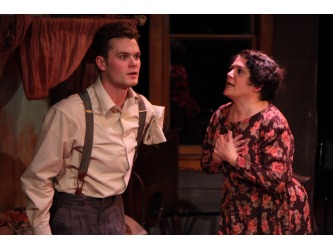 Juno and the Paycock   The Artistic Home 2008

"Strong acting alone cannot explain this utterly absorbing, nearly flawless evening. Director John Mossman deserves credit for its multi-layered textures and graceful turns, and for the tightness of his ensemble. His pitch-perfect casting guarantees that even walk-on characters are performed with a commitment and intensity that drives the story forward. --Jack Helbig, Reader

"The most contemporary, intelligent American play in town at the moment was written by an Irish bricklayer in 1924... In Mossman’s intimate, tight, emotionally suffused production, the perils of living on credit—in a financial, emotional and even familial sense—become frighteningly illuminated.  Again taking on a script that promotes consciousness of the working class, Artistic Home uses selfless, dynamic ensemble playing to create the feeling of ghetto-as-neighborhood.
— Christopher Piatt/Time Out

"Director John Mossman executes a deceptively intricate script with complete success and remarkable connection... He took an obscure classic and brought it to heartbreaking life with profound warmth and humor.  The dramatic movement can turn on a dime from playfulness to tragedy to sweetness and then to rage, but Mossman’s wonderful cast delivers every scene with total truthfulness and never loosens the delicate build in tension...    For so many reasons this is a play that should not be missed.  In a city filled with exciting world premiere productions, The Artistic Home takes a 94-year-old classic and delivers a charmingly fresh and enthusiastically must-see treasure." (****)  Venus Zarus, Gay Chicago

"What sets Artistic Home apart is the way it integrates the paying customers into the artistic environment. You can see it in John Mossman's simple and moving production of Sean O'Casey's "Juno and the Paycock," a classic drama of politics and poverty...(a) memorably intense and committed production."  Chris Jones, Chicago Tribune

"The Artistic Home, which specializes in finely-tooled productions of stealth classics, has been off the radar for a year, caught up in an increasingly desperate search for a new performance space. It's returned, triumphantly, with "Juno and the Paycock".   And oh, how Chicago critics have missed the company. Reviews praise the earthy acting, mousetrap-taut direction and spot-on Irish brogues in this production of Sean O'Casey's 1925 drama about no-hopers undone by hope."  Hedy Weiss, Sun-Times 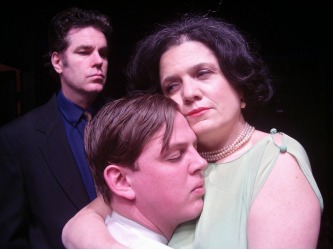 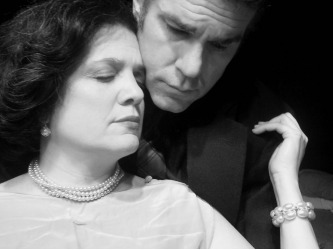 Inge's lost urban drama is brought back to stunning life in the tiny but vital Artistic Home space.  The 60's never looked so sexy and unappealling at the same time...  As our once-antiseptic view of the Leave it to Beaver '50s continues to dissolve into transparencies, the more Inge's aw-shucks plays like Picnic and Bus Stop look like anomalies, while a dark, formerly secret oddball like this one starts to appear to be the playwright's shining gem.
Mossman's grunting, carnal production taps the script's incestuous overtones, latent homosexuality and violent machismo backlash against feminism, and mines them for all they're worth. The cast, all exceptional as self-destructive carousers, is clearly having a ball with the painful debauchery and seems to take particular joy in debunking popular myths of the middle class of Camelot-era America. If the violent proceedings weren't so compelling, you'd be trying to get back to Kansas, too."  Christopher Piatt, Time Out Chicago

"William Inge's 1963 play about an unwed middle-age mother, her new live-in younger boyfriend and her fresh-from-reform-school teenage son sank without much of a trace after its inaugural performances.  But in the hands of director John Mossman and a splendid ensemble at the tiny Artistic Home, it's a revelation... The Christmas Eve party scene is right out of a Cassavetes film, and the entire play, particularly the jarring ending, has the dark sensibility that we associate with David Lynch...  It is so far removed from Inge's usual milieu of dusty prairie towns ("Picnic," "Bus Stop") and so startling in its prescience about the darker aspects of the impending sexual revolution that it deserves a revival as skillful and smart as this one..." Kerry Reid, Chicago Tribune

"John Mossman's staging for the Artistic Home is as uncompromising as the script. Kathy Scambiatterra gives a devastating performance as the mother: her doomed fight for a decent life is as heroic as Inge allows his characters to get." - Chicago Reader

"There's such an overwhelming sense of futility and hopelessness that lives under the surface of Inge's writing that, when given the chance to rise to the top, shocks in its physical and emotional veracity. Director John Mossman and his well-versed cast fully understand this as they take firm control of the language, developing finely etched performances, delivering Inge's tragic messages with dramatic eloquence. This is truly an ensemble-driven piece, and the actors have formed a cohesive unit, ebbing and flowing between the comedy and pathos integrated within the writing."  Gay Chicago

"Part of The Artistic Home's stated mission is 'to give birth to unforgettable moments by working in an intimate space, to touch audiences who are increasingly distanced from human contact.' They accomplish this with great success in Natural Affection although William Inge's characters are people we might want more distance from.Director John Mossman keeps the tone from getting too grim as his cast takes us from laughter to pity, and through empathy and fear with honesty." - Chicago Free Press

"This late, generally unlamented William Inge play, set in Chicago, received a miraculous salvage job in the 28-seat theater that could."  One of the 10 best plays of 2005, Michael Phillips, Chicago Tribune 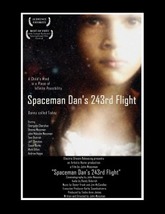 "A bizarre, affecting, smartly written and directed story about childhood and sibling relationships... The movie alternates back and forth between two stories, intertwining them in near-brilliant ways. The great, expressive cinematography ought to win some kind of an award, but even that’s just one standout element in this nifty film. Go out of your way to see this movie. " - Film Threat 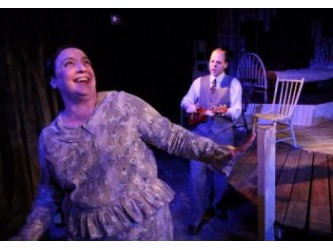 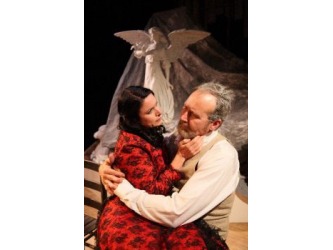 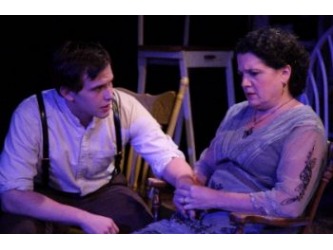 Directed by John Mossman with a high exuberance that moves easily from the tragic to the comic...  Chaotic and involving, "Look Homeward" is one of those delicious period pieces like "Picnic" and "Our Town" that home in on the true nature of American life.  Highly recommended." Hedy Weiss, Sun-Times

I expected old-fashioned from Ketti Frings's 1957 stage adaptation of the famous autobiographical novel by Thomas Wolfe, and got it. But her well-made, mainstream play is also intensely moving and funny in John Mossman's Artistic Home production...Mossman's adept handling of  finely etched characters ensures a brisk, clear, stirring story. -- The Reader

"Few could keep this meandering saga alive, but Mossman manages magnificently. He ushers Frings’s enormous ensemble of boarders and townsfolk through the Gants’ story with remarkable dexterity, coordinating among these extras a smorgasbord of relationships—from flirtatious to frosty—that add necessary farce to the mostly solemn action taking place center stage. In an ocean of actors, each lead provides the striking performance necessary to hold his own." - Time Out Chicago

"...punctuated by several sublime scenes of luminous emotional truth... It’s revelatory, and as gripping a verbal pas de deux as you’ll find on a stage this season." - Chicago Examiner

"John Mossman's tough yet sensitive staging of Ketti Frings' Pulitzer Prize-winning 1957 adaptation for the Artistic Home builds on this company's reputation for sprawling Americana...The finely drawn gallery of supporting characters fleshes out the marginal lives of the tenants...Artistic Home brings this snapshot of a bygone age to life with emotional verve and elan." Chicago Tribune

"Directed with richness by John Mossman, the production moves with a sumptuous pace reminiscent of its southern roots. Everything feels perfectly placed here.  ." - Gay Chicago 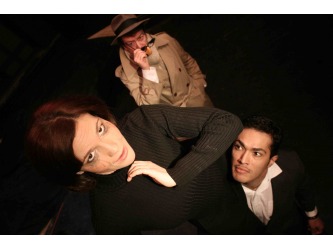 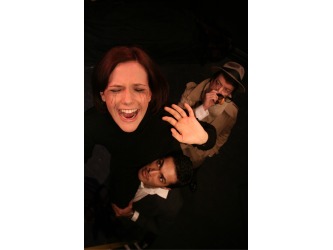 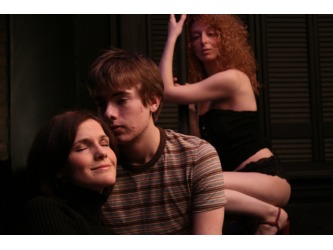 "Mossman has few peers in coaching wrenching work from actors..."  Christopher Piatt, Time Out
Powered by