PANDEMONIUM
When a hospital runs out of PPE, the administrators face an ethical dilemma.

KULESHOV IN THE AGE OF COVID
Quarantine, film school and the 2nd week of Covid.
"Hilarious" - Trevor Albert, Producer, Ground Hog Day.
"So funny! I laughed out loud, and that is saying something. Thank you, that was hysterical." - Holly Wortell, Emmy nominated writer.
"Rejected.  Film attributable to the demented vein whose purpose is not glimpsed" - Covid 19 Festival Jury feedback, Italy.

​REQUIEM FOR A HEAVYWEIGHT at the Artistic Home 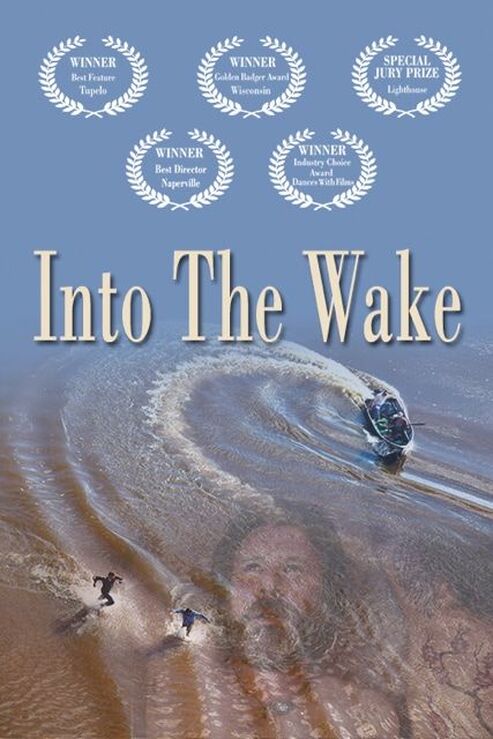 "Among this writer's favorite films of the year.  Director John Mossman handles the material expertly,
allowing it to progress with ease.  As the dark reality of Ken’s situation reveals itself, Into the Wake
shifts from character study and romantic portrait to full- throttle backwoods horror/thriller mode deep
with palm sweat tension.  The perfect, seamless, mature transition rivals and bests many attempted in
big budget, Hollywood thrillers of similar ilk. Highly recommended." - Chicago Journal
CLICK HERE TO VIEW TRAILER 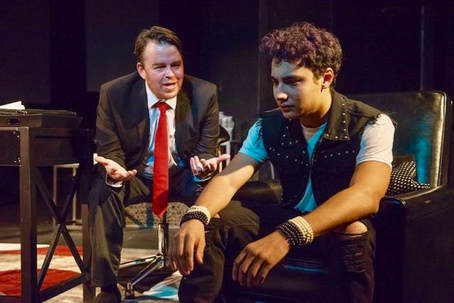 MONGER: The Awakening of JB Benton
Her Story Theater's World Premiere at the Greenhouse
The fourth play in a cycle of dramas exposing sex trafficking practices in Chicago

Chicago Reader-"Pulls no punches. Mossman pulls shaded, fervent performances from Amyx and Zambrano." Highly recommended.
Splash Magazine-"Tautly directed by Mossman...mesmerizing; at a tightly crafted 71 minutes, the stunning delivery of the actors coupled with the sheer pathos and relentless sadism of the factually based story hits many nerves at once."  Highly recommended.
Buzznews-"Haunting, educational and a story that will resonate...Well acted, directed and conceived." Highly recommended.
Third Coast Review-"tense and disturbing. Directed with precise attention to tone and detail...The three actors’ fine performances do justice to the script and Mossman’s fearless direction." Highly recommended.
Theater World-"A hair raising experience...Chilling...superb performance." Highly Recommended

​At The Artistic Home  HOW I LEARNED TO DRIVE 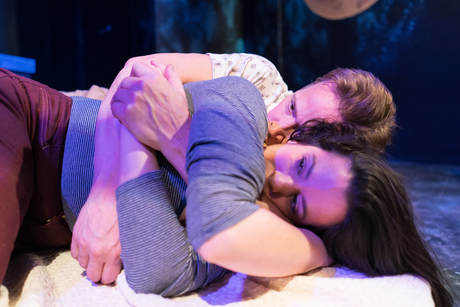 Paula Vogel's Pulitzer Prize-winning HOW I LEARNED TO DRIVE, the pioneering drama of a young woman and her friendship and sexual relationship with her uncle, at The Artistic Home.
Jeff Nominated for Actor in a Lead Performance, John Mossman.

Chicago Reader - "the Artistic Home’s production, starring John Mossman and Elizabeth Birnkrant as Peck and Li’l Bit, is intense and devastating, shocking, and human."
Around The Town - "Mossman accomplishes the nearly impossible task of creating an incestuous monster who is also human...gentle not sinister.  A man haunted by his demons, perhaps a fellow victim himself."
Picture This Post - "A superb script....Be prepared for the emotional rollercoaster."
Buzznews - "Mossman delivers sex appeal without seeming like a predator, which is what makes his performance all the more slick."
New City - "John Mossman is mesmerizing as her Uncle Peck, playing him as a smooth Southern gentleman whose surface warmth and sensitivity overlay a twisted sexuality and a mind-warping manipulativeness."
Our Urban Times - " Uncle peck is eerily played by Artistic Home cofounder John Mossman...The abuse and dysfunctional behaviors of all the family members is so artfully written and performed, one is transfixed."
Chicago On Stage - "John Mossman is scarily gentle as Peck... He plays him as someone who simply doesn’t allow himself to become aware that what he is trying to do is utterly wrong, and he is brilliant."

The Summer Mentorship Program is back!


Click here to learn more about South Side FYI 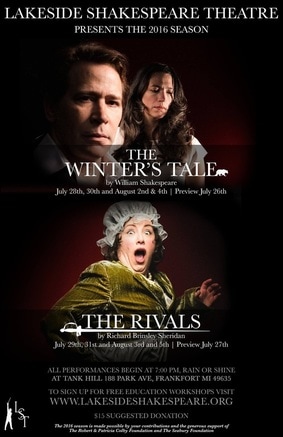 ​TO KILL A MOCKINGBIRD at Oak Park Festival Theater 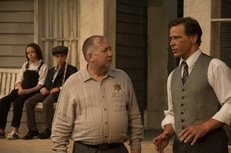 ﻿
DEVOLVED - THE WEB SERIES﻿
A God of diminishing powers finds all earthly hope lies in the hands of four religious nuts and a stoner.
READ THE HUFFPOST ARTICLE 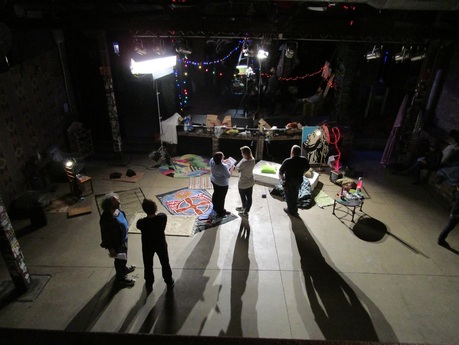 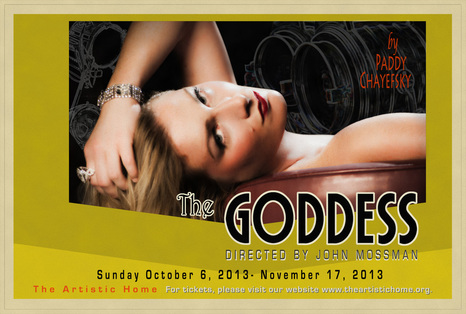 In a first ever granting of film adaptation rights by the Chayefsky estate and William Morris Endeavors,  John Mossman directs and adapts the World Premiere of the Oscar-nominated screenplay The Goddess, Chayefsky's gripping tale of a girl whose lonely childhood, beauty and sexual aura fuel both her rise and her demons during Hollywood's golden era.

"INTO THE WAKE"  DIRECTOR JOHN MOSSMAN FEATURED ON DIRECTORS CUT 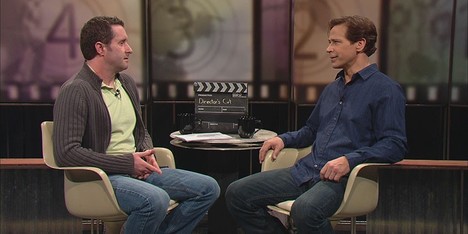 Director John Mossman appears on the season premiere of Director's Cut on WHA TV, Friday July 5.  Tune in at 10 for the interview, followed at 10:30 with a screening of the film. 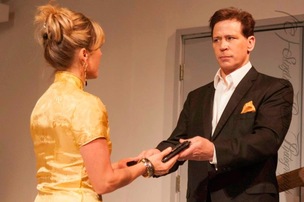 The world premiere of JACOB at Provision Theater

"I have never seen as long and thrilling stage combat as presented by the charismatic Mossman and Tim Gregory.   Jacob is the finest work seen on Provison Theatre’s stage  in years! Don’t miss it." - Chicago Critic 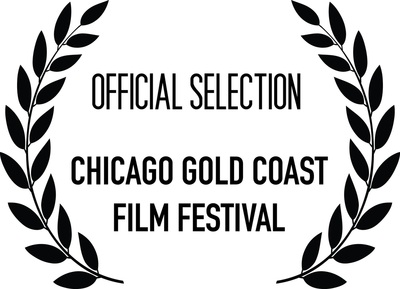 INTO THE WAKE NOW ON SALE!

Into The Wake winner of Best Director for John Mossman, nominated for four awards at the Naperville Independent Film Festival;

INTO THE WAKE premieres in Chicago at the Gene Siskel Center July 21, 23 and 25th 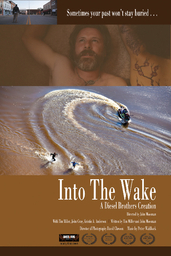 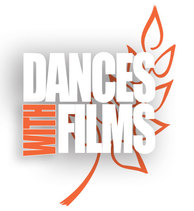 Into The Wake takes home another big award from Dances With Films, the "defiantly independent festival of raw talent", which ran this week at the state of the art  Grauman's Chinese Theater complex in Hollywood.   Apart from providing great recognition among a strong pool of up and coming filmmakers, this award offers access to the hard-to-penetrate inner sanctum of LA agencies and  producers.  This is the fourth  award for the film, which has appeared in five festivals since February.

And for you Texans, Into The Wake will be screening opening night at the San Antonio Film Fest on June 20th!

INTO THE WAKE wins awards at numerous fests as it hits the fest circuit...

Into The Wake receives a Golden Badger at the Wisconsin Film Fest, Best of Fest  at Tupelo Film Fest, a Special Jury Award at Lighthouse Film Fest in New Jersey, and is currently screening at the closely watched Dances With Films at the Chinese Theater in Hollywood.

And for you Texans, Into The Wake will be screening opening night at the San Antonio Film Fest on June 20th!

Appearing now at Steppenwolf in The March 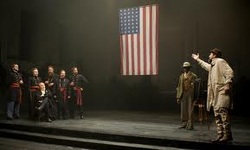 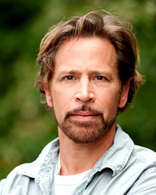 "In September, Seanachai Theatre tackled the great Sean O’Casey’s first important play, The Shadow of a Gunman. It’s a play of character and “crack” (Irish slang for talk and banter) rather than plot—which O’Casey telegraphs miles away—and Seanachai was fortunate to have John Mossman as director. Himself an actor and teacher (he and his wife run The Artistic Home), Mossman took the often-purple and poetic prose of O’Casey and turned it into intimate speech deeply rooted in the personality of each character, without ever losing the Irish charm or O’Casey’s passion."  -  Jonathan Abarbanal, WBEZ


And from WBEZ critic Kelly Kleinman - "Top shows of 2011: Best play with an Irish Lilt (always a crowded category in Chicago) - A tie between Shadow of a Gunman at Seanachai, and A Touch of the Poet, at Artistic Home (directed by Mossman's wife Kathy Scambiatterra).  Whether it's O'Neill or O'Casey, you can always get a true feel of the Ould Sod from these two."

John Mossman Interview on filmmaking from john mossman on Vimeo.

"Into the Wake" to premiere at Phoenix International Film Fest 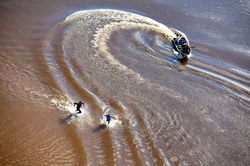 Diesel Brothers' Into The Wake, a psychological action feature directed by John Mossman, has wrapped production and has been announced as an official selection of the Phoenix International Film Festival, and the Wisconsin Film Fest.  Click here to see the high octane trailer currently creating the top buzz at the Phoenix Film Fest, named by Moviemaker magazine as "one of the coolest fests in the world."    It also recently received a private work-in-progress screening at the University of Wisconsin-Baraboo.   Read the article here.  Stay tuned for more news...

Marisol at The Artistic Home 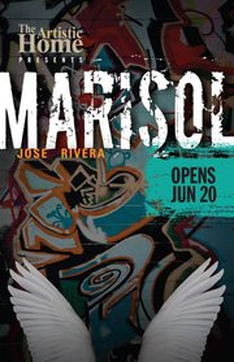 Jose Rivera’s dark comedy Marisol follows the apocalyptic, surreal journey of one young woman through a moonless world where angels are on the attack, coffee is extinct and apples have turned to salt. Surrounded by the insane and ridiculous, Marisol must learn to endure after the loss of her guardian angel and navigate her way through the urban wasteland, searching for hope in the nightmarish war zone that was once her home.  Directed by John Mossman. 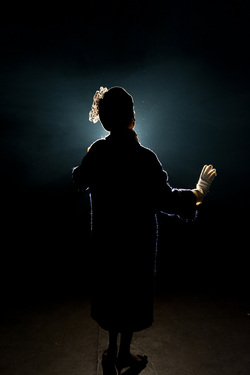 Chicago Tribune, Nina Metz -- 3 Stars! [Childress] had a heck of a sense of humor, which is on full display in her 1955 backstage drama "Trouble in Mind," about racial tensions in a Broadway theater rehearsal room, in a sharp production at The Artistic Home... More than 50 years after the play was first produced, it is a metaphor that still cuts deep.
Centerstage -- A Must See show...Mossman provides riveting antagonism as the play's domineering 'liberal' director...an amazing character in writing and performance....a nuanced, even sympathetic villain...there are seven other characters, each brilliantly realized.
Time Out Chicago, Suzanne Scanlon -- 4 Stars! Velma Austin is excellent...John Mossman is especially good...each character has depth, and the fun of the script buffers the incredibly painful and somehow surprising climax.
Chicago Reader, Kerry Reid -- Recommended! Vaun Monroe's ensemble nails a tricky blend of show-biz posturing and personal revelation...the final confrontation between Velma Austin and John Mossman's pseudo-liberal director is a corker.
Chicago Stage Style, Larry Bommer -- 3 1/2 Stars! Kinetic staging...Velma Austin's stalwart and wickedly subversive Wiletta is a triumph of passive-aggressive manipulation-until she finally exploded in a welcome showdown.  As her unintended opponent, John Mossman plays an imperious 1957 liberal, finally shaken to the core when his dark side goes public.
Chicago Theater Blog -- Mossman is repulsive, yet sympathetic and even likable as the blindly driven director.

Check out "Cashed Out", the recent IFP-Chicago Mentorship collaboration with kids from Hyde Park Academy 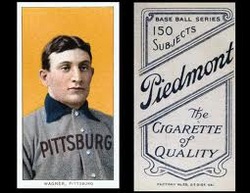 Money talks, friendship walks.   The discovery of a mint 1929 baseball card creates chaos in this dark comedy, the first film from our new partnership with Hyde Park Academy.

The Tallest Man closes to sold out houses

After an extended sold out run, The Tallest Man closed Sunday August 22 - "The Tallest Man is a rowdy good time... blood, sweat, spit, and lust in every scene both implied or seen.  John Mossman directs this production seamlessly."
-Chicago Theater Blog   Jeff Recommended

Next up, Tennessee Williams' Sweet Bird of Youth, opening Oct. 17

Meisner for Film Class returns from Ireland, starting up again this fall at Artistic Home.

John's new Meisner for Film class recently returned from Dublin where he and The Artistic Home's Kathy Scambiatterra co-taught an intensive 3 day workshop at Screen Training Ireland, one of the country's top film centers.  To learn more about this class and others, visit The Artistic Home at www.theartistichome.org.
Scenes from the class can be found on Vimeo, by clicking here. 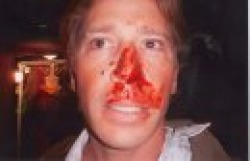 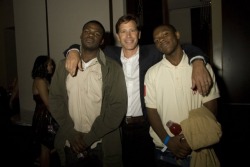 With Lennell and Terrell Davis at the IFP Gala